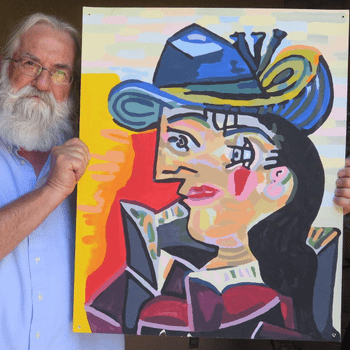 Banner Photo: Performing as Hardscrabble Road are, from left, Brian Osborne on guitar, Brad Eastridge on keyboard, Katie Sayre on vocals and tambourine, Bob Kruse on percussion, and Larry Worster on vocals and guitar.

Michael T.C. Hey has built a solid resume as a concert organist, playing services and shows at churches, including Saint Patrick’s Cathedral in New York and performing on concert stages, including Carnegie Hall, the Kennedy Center and the Shanghai Oriental Art Center in China.

He even played during a mass at Madison Square Garden with Pope Francis.

On Feb. 5, he brings his talents to Green Valley when he performs at Lutheran Church of the Risen Savior, 555 South La Cañada Drive, from 3 p.m. to 4:30.

I recently  talked with Michael about his career and the upcoming show.

Michael spoke of practice being the key to his success. What are you really good at, and how much practice have you put in to master it?

"Here I Am" comes to Green Valley

Have you been mistreated and had to overcome obstacles regarding gender equality?

Walking occurs on various surfaces for about two hours or as long as birds are active. Participants will need to wear comfortable walking shoes and bring water. Beginners welcome.

While bringing your own binoculars is recommended, the park has several pairs of binoculars available for loan to participants. A park pass or an entry fee is required.

Join National Park Service ranger Rick and his co-ranger for a fun nature and history tour of old Tubac and the Santa Cruz River on Wednesday, Jan. 25, from 10 a.m. to noon at Tubac Presidio State Historic Park, 1 Burrell Street, Tubac.

Bring layers, water, snacks, and footwear for all trail conditions.

The tour is offered on multiple dates in the upcoming months

If you have additional questions, call or email: info@tubacpresidio.org