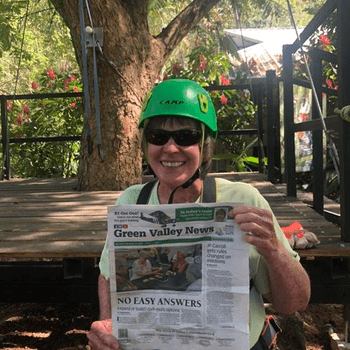 What's happening in your community? Read what the Green Valley News and Sahuarita Sun reporters have been working on, or share what you see happening around town!

Adults with special needs give back to the community

We're all in this together, and sometimes it takes a collaboration of our skillsets to make the community a better place.

Adventures With Friends, a group formed to provide social activities for adults with intellectual and developmental disabilities in the Sahuarita area, has expanded its footprint in the community by volunteering at the Sahuarita Food Bank and Community Resource Center.

If you want to help Adventures With Friends or participate, contact Penny Grabowski at 412-401-0581 or pennygrabowski@verizon.net.

What are your thoughts on the partnership between Adventures With Friends and SFB-CRC? Do you volunteer or donate to one of the local food banks?

Learn more about the tragic accident and the local man who was a big part of the Green Valley softball community that lost his life.

Go here to learn how oily rags wet with flammable or combustible liquids can start a fire.

That dog on the front page

We had a lot of fun coming up with the headline on today's Page 1. The winning suggestion was from reporter Mary Glen Hatcher, who wrote the story: "Clean-up on aisle 6."

It's about a dog who did his business in the middle of Safeway.

While that generated more than 300 comments on a social media site, it spoke to the larger issue of people bringing their pets into stores and restaurants — pets that aren't service animals and really have no business being there.

The story goes into state law and what shopkeepers can and can't do. For a lot of us, it's not really an issue until something like this happens. Let us know what you think.

Safeway isn't saying much, and we're not surprised. They still haven't explained why prices are substantially higher in Green Valley and Sahuarita than at their Tucson stores.

What are your views on pets in grocery stores and restaurants? Have you ran into people practicing poor pet etiquette?